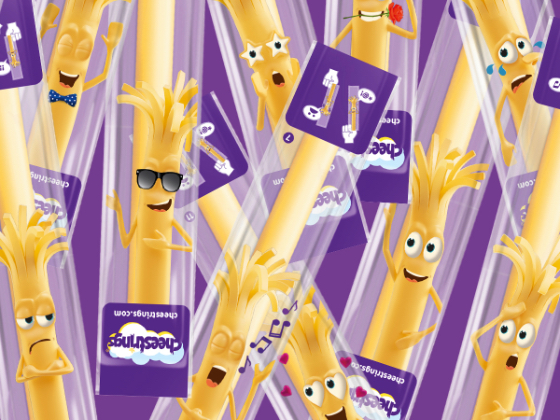 Kerry Foods briefed WowMe Design to update their kids dairy snack Cheestrings, giving a makeover to their well-loved on-pack character Mr. Strings that included the development of sixteen character poses for the inners.

The Cheestrings brand is worth over €100m across its international footprint and Mr. Strings has appeared on-pack since it first launched in 1996. He’s had a few minor makeovers in the 22 years but it was time for him to have the full Hollywood treatment with a contemporary rendered look. The new look and packs coincide with a new TV campaign airing from March in the UK.

Andy White, Creative Director of WowMe! Design remarked “It’s great working with Kerry Foods and the Cheestrings brand. Over the years Mr. Strings has developed a real personality and this was our opportunity to bring him to life further. He’s moved from a flat graphic to a fully formed 3D rendered character.”…He added, “We are really excited about the new look for Mr. Strings, the new packs look really strong and have real shelf standout.”

The new packs are now appearing on shelves in all major retailers across Europe.

via Packaging of the World – Creative Package Design Gallery http://ift.tt/2GqoNaN