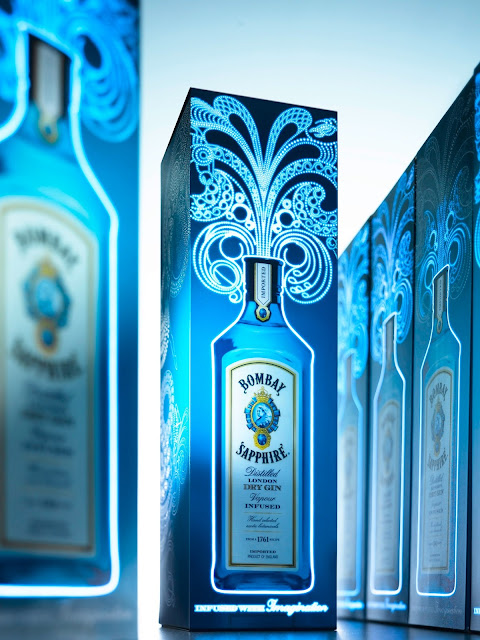 Last week, the Bombay Sapphire Electro pack won a Bronze Design Lion at arguably the ultimate celebration of creativity across all communications, the Cannes Lions Awards. This win swiftly follows the FABulous award, the top accolade at this year’s FABs – International Food and Beverage Creative Excellence Awards, which the Electro pack also won in the last
month.

Inspired by the Bombay Sapphire global marketing campaign ‘Infused with Imagination™’, Bacardi used cutting-edge technology to illuminate the new Bombay Sapphire gin gift pack in a cascade of lights every time it’s picked up by shoppers. Bacardi has a reputation for pioneering in-store promotions which engage the consumer and drive footfall and sales in Travel Retail. Designed by Webb deVlam, and manufactured by Karl Knauer, the Bombay Sapphire Electro pack is a new innovation in packaging, which uses electroluminescent ink to produce a flow of lights illuminating artist Yehrin Tong’s
illustration.

Mary Lewis, chair of the FABs judging panel said, “Bombay Sapphire ticked all my boxes; innovative, on brand, and beautiful! It had our unanimous vote. The brand graphics have
always been considered quirky, but here they are dramatised and expressive of the product experience and promise! We loved it.”

The Bombay Sapphire Electro gift pack was introduced into the global travel retail channel in December 2012. The packaging technology, which is being used for the first time, allows an electrical current to run through different pathways of the illustration, illuminating them sequentially to create a ‘cascade’ effect. The 18-second light show is powered by a battery in the base of the pack which is triggered by a hidden mechanical switch when the pack is picked up from the shelf.

Richard Cuthbert, Bombay Sapphire Senior Brand Manager for Bacardi Global Travel Retail is understandably delighted by the success of the pack: “It was a challenging project but we knew that ‘Electro’ would make a massive impact and it clearly has. We are thrilled by the success of the campaign and to get recognition from both the design industry and the advertising industry is a bonus.”

Webb deVlam’s Creative Director Dominic Burke added “We are incredibly pleased with the remarkable success of Bombay Sapphire Electro. Electroluminescence technology is such a good fit for Bombay Sapphire as the illumination effect allows a seamless integration with the ‘Infused with Imagination’ campaign. The level of intrigue that Bombay Sapphire Electro has created across the board has been truly phenomenal.”

Bombay Sapphire Electro has also been shortlisted for the Packaging Superstar Award, the winner of which will be revealed at the Starpack Awards ceremony in London on 11 July.

via Packaging of the World: Creative Package Design Archive and Gallery http://feedproxy.google.com/~r/packagingsoftheworld/~3/c2BZlqF7dgA/bombay-sapphire-travel-retail-gift-pack.html