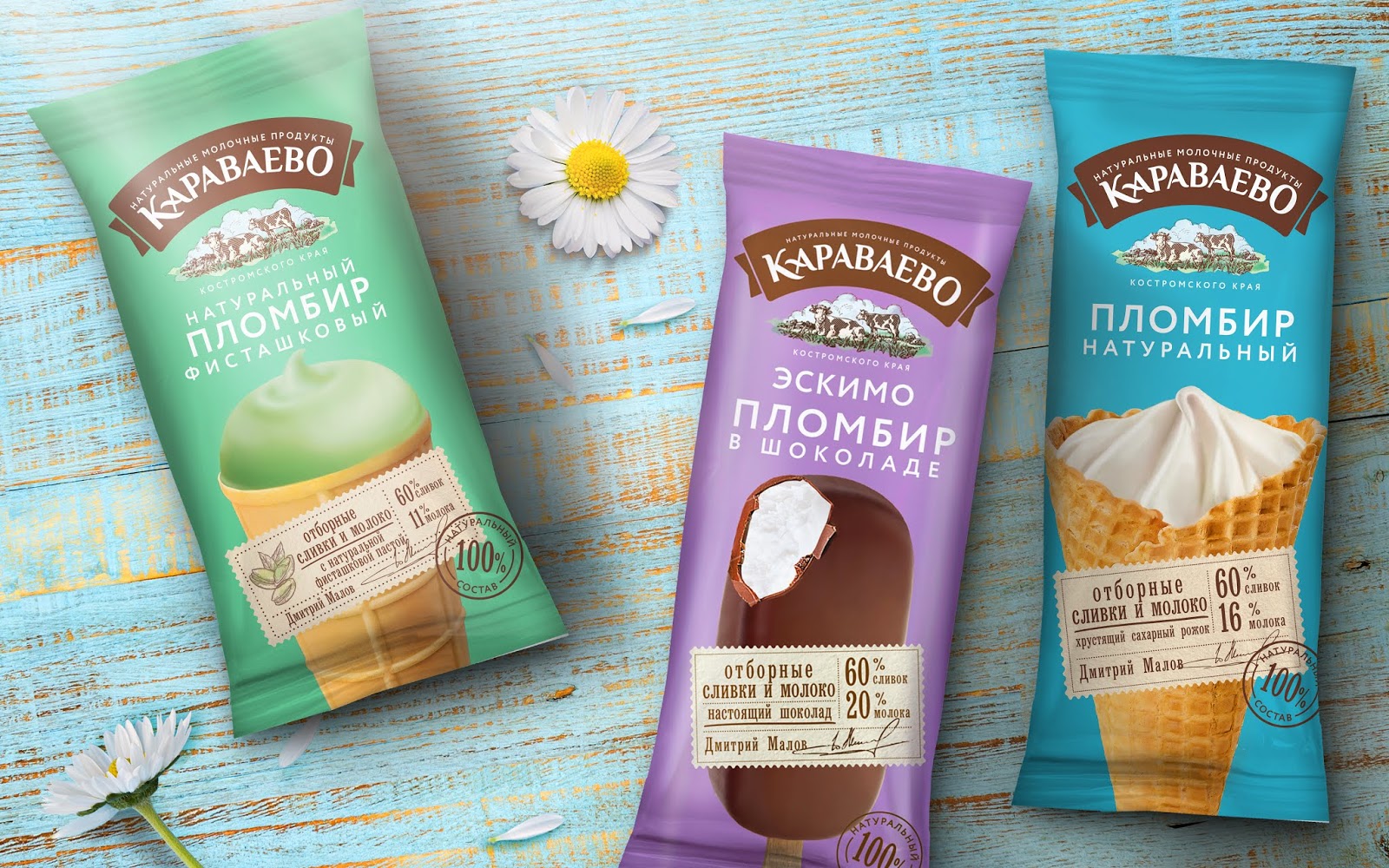 «Karavaevo» commissioned us to make rebranding of the ice cream brand.

Task
Dmitry Malov, the owner of the brand "Karavaevo", has its own dairy farms in the Kostroma region. Only fresh milk and natural cream are used for the production of ice cream. Dmitry set a goal to double sales by creating a powerful brand that would distinguish its products from competitors.

The previous design could not solve this problem. Completely invisible, lost among strong competitors, it did not make any impression on the buyer. The design was a reference to Russian folk crafts and Gzhel ornaments, but it didn’t turn out very well: the logo merged with Gzhel patterns. And there was no word about the main advantage of ice cream "Karavaevo" –the naturalness of the composition.

Decision
When it comes to ice cream, the first impression is very important. Ice cream on the counter often lies mixed up and, as a rule, the buyer takes what attracts his attention.
The descriptor "natural dairy products of Kostroma region" supports the basic idea of communication. The logo has undergone great changes. We put it on a brown wide line, which goes well with the delicate pastel colors of the package. In addition, the contrast of the matte packaging and the brilliant logo on it helps to stand out.
Under the logo there is the author's illustration depicting cows peacefully grazing in the meadow. Contextual layer is well-developed: clearly described category (natural ice cream, Popsicle in chocolate), and a large image of the product makes you want to try it.
For the conversion layer responds the mark at the bottom of the package, where we once again emphasize the natural composition: selected cream, milk, handmade cone. The manufacturer values the quality of its product so much that he does not buy cones, but bakes them itself. This information on the packaging creates additional confidence in the manufacturer.

The image of the milk gives an additional connotation to the naturalness. And as the final touch – personal responsibility of the owner Dmitry Malov – his signature.

On the reverse side of the package, we once again talk about naturalness. The composition is inscribed in the image of ice cream. You can immediately see how much cream, milk, sugar contained in each portion as a percentage. The manufacturer is as open and honest as possible to the consumer.

Ice cream "Karavaevo" is an indescribable taste of fresh milk and natural cream, which returns to childhood and reminds of the best moments.

via Packaging of the World – Creative Package Design Gallery https://ift.tt/2MSiovX